We accept all insurance plans and are locally owned and operated. Call us for a price comparison with your current pharmacy. If you would like to transfer your prescriptions, call us and we will take care of everything (843) 379-3278. We can save you time and money. 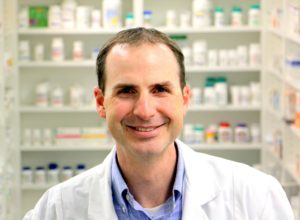 While working the past eleven years for both independent and chain pharmacies, he discovered a love for helping people in the community.  This love for helping the community is what led him to open Carolina Pharmacy of the Lowcountry in 2014.  He enjoys owning an independent pharmacy because he actually has time to get to know his customers and is able to offer many services the that the chains do not.
While not working at the pharmacy, Jeremy enjoys being outdoors.  He likes most sports, especially NASCAR.  Also, he loves to spend time with his two children, Reeve and Rebecca.

Mike grew up in Allendale, SC.  In 1977, he graduated from the USC College of Pharmacy.  He has over 40 years experience as a pharmacist. Mike has owned and operated three independent pharmacies in both Ridgeland and Beaufort.  Mike has over 20 years of compounding experience, earning certification as a compounder at Professional Compounding Centers of America (PCCA) in Houston, TX.  He is certified in both sterile and non-sterile compounding. Mike is a top consultant for bio-identical hormone replacement.  In 1978, he opened Ridgeland Pharmacy and operated it for over 13 years eventually selling the pharmacy. In 1995, he began working with Joe Lawson at Prescriptions Only in Beaufort. In 2000, Mike opened Main Street Pharmacy in Ridgeland, SC.
Mike is an avid hunter and fisherman.  Also, he enjoys spending time at his family farm in Barnwell County.   In addition, he enjoys watching college sports, especially football.

Legaré Horn
Legaré is from Charleston, SC, but she has called the Beaufort area home for most of her life. She has 16 years experience working in independent pharmacies. In addition, she has been a compounding specialist for 14 years. She enjoys working in independent pharmacies because “patients are not just a number” & “you actually get to talk to a person when you call the pharmacy.”

We love our customers and welcome your feedback and suggestions. Use our Contact Us page to tell us what we’re doing right or what we can improve on.